These facts and other amazing little delights can be found on the EPA-USA FAQ page. The EPA-USA said they have been looking into this problem since 1999. You can read a doozy of a 41 page report quaintly titled errata.pdf.

Should you be worried about your health? Again we refer to the EPA-USA FAQ page: Studies have shown that pharmaceuticals are present in some of our nation’s water bodies. Further research suggests that there may be some ecological harm when certain drugs are present. To date, no evidence has been found of human health effects from PPCPs in the environment.

The American Pharmacists Association produced a press release in February of 2007 on how to correctly dispose of pharmaceuticals. Here’s a few highlights.

When tossing unused medications…..Crush solid medications or dissolve in water and mix with kitty litter or a solid kitchen substance….. then place in a sealed plastic bag …before tossing in the trash.

Check for approved state and local collection programs or with area hazardous waste facilities. In certain states, you may be able to take your unused medications to your community pharmacy.

This year the EPA-US Great Lakes ran the Great Lakes 2008 Earth Day Challenge with one of the aims to collect “1 Million Unwanted Pills”. To reinforce the point here’s a quote from the same page:

Traces of medicines have been found in streams and the Great Lakes where we get our drinking water and have also been detected near wastewater treatment outflows. Some of these medicines can lead to reproductive and developmental problems in fish and other animals. We often treat leftover medicine as a common household waste. More than half of people surveyed throw their unused medicines in the trash while a third flush them down the drain. In both cases, the medicines have the potential to be released into our rivers and lakes

August 6th 2008: Another press release from the EPA titled “EPA Continues Work to Understand Potential Impacts of Pharmaceuticals in Water”

The agency’s work to increase industry stewardship and scientific understanding of pharmaceuticals in water continues,” said Benjamin H. Grumbles, EPA’s assistant administrator for water. “By reaching out to the National Academy of Sciences and requesting information from the health care industry, EPA is taking important steps to enhance its efforts.

There’s a lot more words in that press release but I think you will agree that there is an adhoc approach in the USA for dealing with pharmaceutical waste, with a lot of nice words thrown in. 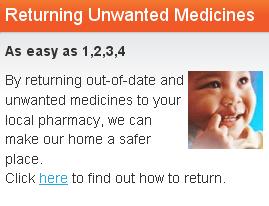 It really is as easy as 1,2,3. July 2008 marked the 10 year anniversary of the Return of Unwanted Medicine Program. Simply walk into any retail pharmacy in Australia with your out of date or unwanted medications and they are accepted and placed in a yellow 20 litre sealable container. They are returned to the pharmaceutical wholesalers and from there collected by the waste disposal experts for high temperature incineration which is the safest way to destroy this sort of waste. Drivers are accredited and random audits are carried out. There is the chance for diversion but in 10yrs there have only been a handful of instances.

The RUM Project is funded by the Commonwealth Department of Health & Ageing.

Consumers can return medicines TO ANY PHARMACY – ANYTIME

Over 400 Tonnes (440t US)of unwanted and out of date medicines are collected every year.

( As an aside, Australia has about 22 million people. The USA had 305 million or so when I checked at the population clock. Would 6100t (US) of pharmaceutical waste really be stopped from going into normal waste in the States?)

If I’m writing this there has to be a bush slant. There is.

Our clinics are in one state, our head office and a lot of logistics come from another state (still one of the closest towns to us). When a pharmaceutical item goes out of date and put in the bin it becomes waste. This is then legally not allowed to cross state borders! Several years ago pharmaceutical waste was sometimes placed in the correct containers but most often not as it was difficut to have empty buckets supplied by plane. It was then driven back in the back of a troopie by anyone going into town to one of our suppliers, repacked (i.e. now double-handling waste) into the appropriate containers then entering the RUM process.

To improve this process we now deal direct with RUM. Our environmental health bloke and myself move around the lands and we are the ones who remove waste and sharps sealed in approved containers to a central point. The pharmaceutical waste is then placed into metal crates supplied by RUM and locked and trucked to Perth using a driver accredited to handle waste (again done by RUM for us). I have a key and the contracted waste management company in Perth has a key.

Now all we need is for the roads to be capable of taking trucks again and I can get some trucked out.

The system we run is probably the best, and simplest in the country and I hope can be emulated by other remote health services.

8 thoughts on “Disposal of Pharmaceuticals: A Comparison”