The Closing the Gap report was released Thursday morning. Surprise surprise there had been no real change in the indicators being looked at. The following is a reprint of an article found at theconversation.com

By Michelle Grattan, University of Canberra

The latest Closing the Gap report, tabled in federal parliament on Wednesday, shows poor progress on improving the situation of Indigenous Australians on many key indicators.

Only two of the targets set in 2008 by the Council of Australian Governments are on track.

Prime Minister Tony Abbott told parliament that in many respects the report was “profoundly disappointing”, despite the concerted efforts of successive governments.

Declaring that more work was needed, Abbott also urged Aboriginal people to have high expectations for themselves and especially their children in the effort to make greater progress.

There had been some improvements in education and health outcomes, Abbott said, and “we are on track to halve the gap in year 12 attainment rates for [those] aged 20-24”.

The target to halve the gap in mortality rates for Aboriginal and Torres Strait Islander children looked achievable by 2018.

A new target of closing the school attendance gap within five years should be also achievable.

“However, the other targets – to close the gap in life expectancy within a generation; to ensure access to early childhood education for all Aboriginal and Torres Strait Islander four-year-olds in remote areas; to halve the gap in reading and numeracy for Aboriginal and Torres Strait Islander students; and to halve the gaps in employment outcomes – have either not been met or are not on track to be met.”

What had to be changed was entrenched and multigenerational disadvantage.

“This won’t happen overnight and it may not ever happen unless we continue to place high demands on ourselves of what we can achieve together.”

Outlining some success stories, Abbott said that in every community the foundations for success were education, jobs and a safer living environment, underpinned by better health. The key was the practical delivery of programs and policy.

But while government policies could be a catalyst, where success was achieved it was due to Aboriginal and Torres Strait Islander people who wanted better for themselves.

Abbott said that while most Indigenous families did make sure their children attended school regularly, “too many are still missing too much school, especially in remote areas”.

Some Coalition MPs walked out when opposition leader Bill Shorten referred to the government’s funding cuts.

Shorten told parliament the Closing the Gap framework stretched beyond the life of any government. “This is an endeavour where every opposition wants the government to succeed,” he said.

“But when a government cuts $500 million from essential services, we are compelled to point out what these cuts mean.”

Vital organisations didn’t know whether their funding would be continued or withdraw. Cuts would mean shelters for those fleeing from violence would be closed; they would rob Indigenous Australians of legal aid; preventive health programs would be hit.

Shorten appealed to the government to reverse the cuts and “seek to repair the harm”.

This article was originally published on The Conversation.
Read the original article.

A couple of weeks ago I had the Pharmacy Guild of Australia President George Tambassis and the Guild’s Communication Manager Greg Turnbull travel with me in remote Western Australia. Here is George’s view of the trip originally published in the Guild newsletter “Forefront”.

If I had to choose three words to summarise my recent tour of pharmacy services in remote Aboriginal communities in Western Australia, they would be: educational, confronting, and inspiring.

The idea for the four-day tour arose when I bumped into my old university friend Andrew ‘Robbo’ Roberts, at the FIP international pharmacy conference in Thailand in September last year.

Robbo has been a remote pharmacist attached to the Ngaanyatjarra Health Service for the past ten years. The health service, with headquarters in Alice Springs, covers an area the size of Victoria, including 10 clinics equipped with drug rooms. All of the communities are actually in Western Australia, in the remote lands to the west of Alice Springs.

The catchment area includes about 2500 people – 90 per cent Aboriginal. Robbo’s job as a salaried pharmacist is to maintain the medicine stocks across the ten clinics, provide professional pharmacy services directly to patients at the clinics and in homes, and to provide medication continuity across the vast area.

For one thing, this means more driving than I imagined could be inserted into anybody’s workflow! On day one of my tour, Robbo picked me up at Alice Springs Airport, we stopped for a meeting with the CEO of the Health Service, James Lamerton, then drove 924 kilometres to Robbo’s home in the community at Jameson.

One of the key achievements I observed was Robbo’s organisation of the remote clinic medicine facilities – through an ‘imprest’ system he has devised. The purpose of this is to ensure that the medicine stocks at all of the clinics are the same, and fully replenished as needed. The stock comes through bulk supply under Section 100 of the National Health Act – medicines packed and supplied by community pharmacies in Alice Springs and Kalgoorlie. 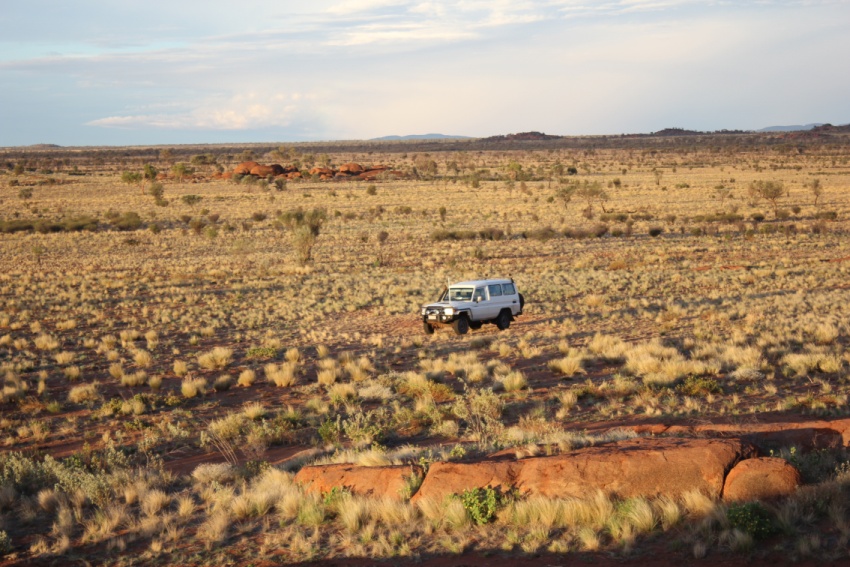 One area of concern for Robbo is the inability of pharmacists to claim Medical Benefits Schedule funds for services within his scope of practice and where no community pharmacy is available, while a nurse delivering the same service can make a claim. This is a vexed and longstanding issue, but I feel it is one that should be addressed in recognition of the primary health care role that can and should be played by pharmacists in remote parts of Australia.

What I saw on this brief visit was quite confronting in terms of living standards and cultural differences. It was a first-hand glimpse of why our society has found it so hard to bridge the gap in morbidity, mortality and education. The Third World conditions in which some people are living in these areas is quite disturbing. Health literacy is very poor and is reflected in adherence rates. I wish to sincerely thank the Ngaanyatjarra health Service for the work it is doing, and for allowing me to visit some of its clinics. I also pay my respects to Robbo for his commitment.

I was pleased to learn that some of the medicine shelving in the clinics was provided with the assistance of the Guild under the Fourth Community Pharmacy Agreement. I believe there is more we can do to assist, and as we work on the shape of the next Pharmacy Agreement we will look for opportunities to assist Aboriginal health, through rural and remote community pharmacies, and through services such as the one that employs Robbo.

Save the Children are looking for pharmacists amongst other health professionals to set up an treatment centre in Sierra Leone for both case management and support to those who are affected.

The clinical staff they are looking for to provide expertise and support include:

Training (which you will be paid for) will be provided before being deployed. These will be for a minimum of four weeks and upto six months at a time. There is a salary, medical insurance and accommodationprovided.

The people they are looking for to work in this emergency outbreak (this outbreak of Ebola has killed more people than all other outbreaks combined) are preferably those who have worked in a humanitarian situation or in international development.

Prior to deployment to the field, a period of paid training will be provided which includes relevant organisation inductions and security training, external training on Ebola risk management (hygiene protocols; use of PPE etc).

Please note: due to the nature of this recruitment, applications will be reviewed as they are received and suitable candidates contacted on an on-going basis, as we build a roster to support the treatment centre over the coming months.

Deployments will be for a minimum of 4 weeks (but may be up to 6 months) and successful candidates will be offered a competitive salary package including medical insurance, accommodation and other benefits

We are interested in hearing from you if you have experience of working in a humanitarian situation or have worked in an international development environment (please outline this in your cover letter).

Applications close October 6th (at midnight UK time) though it wouldn’t surprise me if the job was kept open to allow it to roster pharmacists over a lengthy period of time.

Please go to the job advertisment for more information and to find the job descriptions for any of the positions mentioned above. The pharmacist job description can also be viewed and downloaded below.

The medical observer today had an article on GPs involved in the response effort including helping patients out with lost scripts as people left their homes with minimal or no belongings.

There are two ways you can obtain medications besides seeing your doctor. Your pharmacist can provide three days emergency supply or can contact your doctor on your behalf to confirm the medication and ensure the scripts are sent to the pharmacy “as soon as practicable” as stated in the Poisons and Therapeutic Goods Regulations 2008 (NSW).

There are also ways to have authority prescriptions ordered earlier and pick up an early supply of your medication if you have the script but no medication.

All these are encompassed in the relevant state and federal law but brought together in the the advice provided by the federal Department of Health for areas affected by bushfire.

The document also has information for pharmacists on claiming for prescriptions if phone lines are down or their prescription claim is destroyed by fire.