It’s another Pleasant Sunday Afternoon(PSA) here. How is it where you are?

Last week I put up a few photos of some bird life at Dalhousie Springs on the western edge of the Simpson Desert.

Bill Arnold, another pharmacist sent some pics he said I could use of his crossing in 2005.

We went through East West in 2005.
A magic place. Showers and dunnies. And birdlife.
We stopped for a cuppa the day before at a spring with millions of finches.
Camel tracks, no camels.
Aren’t you a bit lost ? Didn’t think your mob were in this area.

My pictures were from the archives. When I went through there where no facilities or wire barriers. Only wildlife. I think it was 2003.
And whilst I am never lost I have been geographically misplaced for various lengths of time which adds to the enjoyment of a trip! Well I never use a GPS. It’s all ready reckoning. However I might get one for here. Some of the elders can direct me cross country over sandunes to land directly on a waterhole miles away that they have not visited for ten years. It is amazing.
As my PSA posts continue I hope to have pictures and stories from all over rural and remote Australia.

Now to the Pictures.

In 2003 a Western Australian commissioned panel looked at the long working hours in the mining industry. A lot of the focus was on the Fly In Fly Out (FIFO) workforce suggesting they suffered from higher levels of drug abuse, depression and family breakdowns. It didn’t seem to stop the increasing numbers of FIFO workers. 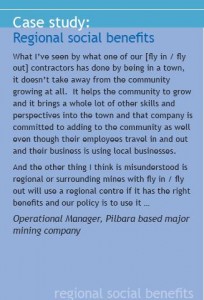 MATTHEW CARNEY: Rather than growing communities, centres like Port Hedland were being gutted and the divide between the haves and the have-nots was as wide as an open cut.

However the mining companies continued to produce reports that purportedly showed that FIFO workers benefited communities. With the economic turn-down mining companies seem to be moving opposite ways. A contractor at the Argyle diamond mine will give preference to local workers over FIFO workers as they start laying off staff. Unfortunately the larger mining companies who are the major employers seem to have other ideas.

The Member for the Pilbara, Tom Stephens, has criticised the mining company over its plans to increase its work force by 20 per cent over the next three years without building new houses in Port Hedland and Newman.

ABC TV recently reported on a Western Australia study that showed the health and social effects supposedly suffered by a FIFO workforce (talked about in the opening paragraph) was not correct and there was no more hardship than local workers. This led to one company to say they would increase the FIFO workforce (supposedly to the detriment of local workers, community infrastructure etc as cost is always the driving factor).

Most importantly, research from Griffith University has shown that these agreements between mining companies and native land owners has NOT led to any benefits for the local people.

“In all 17 cases taken to the Tribunal in the last decade, the Tribunal has granted the mining leases and been unwilling to impose conditions that might prove onerous for the miner…..

Native Title should provide Indigenous people with the opportunity to benefit from Australia’s resources boom, to reduce their dependence on welfare and increase their presence in the ‘real economy

The Australian Institute of Health and Welfare in an article titled Housing and Infrastructure states:

Housing has been identified as a major factor affecting the health of Aboriginal and Torres Strait Islander people. Adequate housing provides protection from the elements, minimises the risk of disease and injury, and contributes to the physical, mental and social wellbeing of the occupants. Inadequate or poorly maintained housing and the absence of essential infrastructure, such as a supply of safe drinking water and effective sewerage systems, can pose serious health risks.

One hundred and fifty five million dollars is about to be spent in the Northern Territory on indigenous housing as part of a five year, $672 million dollar program. (A list of the involved communities is here). I find it difficult to understand comments made by intelligent men such as those by Gary Johns of The Bennelong Society, who has stated:

and that they should move to where there are jobs.

I have commented here(and over here!) on the health benefits of indigenous people living in small communities on country.

The earlier part of my post talked about the major companies flying in and out workers rather than increasing local infrastructure and employing locally. So where do we build these indigenous houses so they are closer to work? Do we have them move to towns first and live in overcrowded conditions if in a house at all or do we build a house first and try and reduce overcrowding and the diseases that I am sure the members of the Bennelong Society have never suffered from.

Why don’t we look at ensuring the agreements signed between mining companies and native title holders provide real benefits, including jobs, are delivered to the local indigenous population.

I am sure we as a country and the members of The Bennelong Society if they could bury their ideology for a while) can come up with innovative and workable proposals that benefits as well as respects indigenous Australians and their culture.

CHILDREN of the troubled Kimberley town of Halls Creek have unanimously nominated an alcohol ban as their No1 wish, ahead of a local cinema and an international airport.

More than 100 children aged 10 to 14 at the school in Halls Creek told youth facilitator Michael O’Meara that, more than anything else, they wanted alcohol eliminated from their town and wanted help for their parents and other adults in Halls Creek to get sober.

“The young people were very clear about what they wanted … they weren’t prompted or given suggestions,” said Mr O’Meara, facilitator of last year’s 2020 Youth Summit.

“They spoke of their fears that some in the community would not like them asking for the elimination of alcohol, and they spoke of the impact of alcohol on their lives – I can say they have very real reasons for wanting it to stop.” continued at The Australian newspaper Jan 12th 2009

A few days ago I quoted from the Western Australian Aboriginal Child Health Survey:

Perhaps we should be acting on what the children want us to.

Instead, as well as the above reports, other states also continue to produce reports rather than acting and introducing sustainable and ongoing programs (one off projects seem to constitute long term planning and solutions).

Queensland has recently released the report Children and young people in Queensland: a Snapshot 2008.
Here a few of the “highlights”:

6.0% of all 0 to 17 year olds in Queensland were Indigenous, although Indigenous people make up only
3.3% of the population

In the Northern Territory we had the report Ampe Akelyernemane Meke Mekarle “Little Children are Sacred” (large PDF) that was misused by the then government to initiate ““The Intervention”“(Northern Territory Emergency Response). This seems to have led to a doubling of infrastructure, finding out what we already new but no sustainable programs in healthcare, or to increase resources to further deal with the health issues we already knew about and where the “very foundational principles on which Aboriginal existence are built — community, culture and collective rights — have been shaken, demonised and exposed to a level of scrutiny unparalleled in recent times.”

A review of the Northern Territory Emergency Response can be found here. Various articles in the Medical Journal of Australia about the response have stated:

“paints a demeaning and misleading picture of NT communities as exhibiting “a complete breakdown of normal mores”. This fits snugly with the “white blindfold” view, described by Tait, that will only further disempower marginalised Aboriginal people and communities”

“Indigenous communities must have a role in data collection and anagement“.

It just goes on and on.

There is no one better than Fiona Stanley to conclude with. In a recent speech (video here)

The frustrating and anguishing thing is that we have known what we need to do for 20 years; the evidence has been around in Royal Commissions, HREOC reports, a myriad of government reports as well as our research papers. How to implement is the major issue. Other countries with Indigenous colonised populations have similar problems but are doing much better than Australia – what can we learn from them?

Welcome to another Pleasant Sunday Afternoon.

After you cross the Simpson Desert from East to West you get to Dalhousie Springs where even the hot spring fed waterhole feels cool…. for a time.

Being the only water for a bit it attracts a little bird life. After a swim I took out my camera and waited. The scan picked up a little dust (no – I am not always a film troglodyte. Go here for proof!) so I apologise for the few marks you see in the pictures. Click on the pictures for bigger images.

Spinifex Pigeon is called Katararrtji in the Ngaanyatjarra Language. Although the distribution of the Singing Honeyeater is supposedly through most of Australia (including here) I haven’t seen one here to get the local name. Singing in language is “yinkaku” for singing a song, and “wangkaku” means birds singing.

Bob Gosford from The Northern Myth in an email discussion pointed out the pigeon here is a crested and not a spinifex pigeon. And he is right. I have some Spinifex Pigeon shots from Palm Valley I will include here when I find them! Next time I will ensure I double check my wildlife. Bob has a good article on them you can read here