By distributing plants and associating them in mosaics, then using these to lure and locate animals, Aborigines made Australia as it was in 1788, when Europeans arrived.

Where it suited they worked with the country, accepting or consolidating its character, but if it didn’t suit they changed the country, sometimes dramatically, with fire or no fire.

“No fire” because a conscious decision not to burn also regulates plants and animals. They judged equally what to burn and what not, when, how often, and how hot. They cleared undergrowth, and they put grass on good soil, clearings in dense and open forest, and tree or scrub clumps in grassland.

A common management system can be recognised in enough dispersed places to say that the system was universal – that Australia was,
as the title says, a single estate, and that in this sense Aborigines made Australia.

A history of observation

Ted Strehlow, Debbie Rose, Peter Sutton and others offered insights on Aboriginal belief and practice, especially in the centre and north where traditional management survives best.

I learnt too from seeing in the bush how plant responses to fire or no fire declared their history, and from how people like Alfred Howitt, Bill Jackson, Beth Gott, Peter Latz and Daphne Nash related this to Aboriginal management.

Building on these resources

Bushes and trees, as well as grass, were necessarily associated and distributed. Grass eaters seek shelter as well as feed, and feed-shelter associations (“templates”) must be carefully placed so as not to disrupt each other, as this would make target animals unpredictable and the system pointless.

Given how long eucalypts live, templates might take centuries to set up. Each needed several distinct fire regimes, continuously managed and integrated with neighbours, to maintain the necessary conditions for fire-stick farming.

Two factors blended to entrench this, one ecological, the other religious. Ecologically, once you lay out country variably to suit all other species, you are committed to complex and long-term land management. Aboriginal religious philosophy explained and enforced this, chiefly via totems. All things were responsible for others of its totem and their habitats.

For example, emu people must care for emus and emu habitats, and emus must care for them. There was too a lesser but still strong responsibility to other totems and habitats, ensuring that all things were always under care.

Totems underwrote the ecological arrangement of Australia, creating an entire continent managed under the same Law for similar biodiverse purposes, no matter what the vegetation.

Despite vastly different plant communities, from spinifex to rainforest, from Tasmania to the Kimberleys, there were the same plant patterns – the same relationship between food or medicine plants and shelter plants.

Blinkered to the obvious

Why has it taken so long to see the obvious?

Put simply, farming peoples see differently. Like our draught horses, we wear the blinkers agriculture imposes. Australia is not like the northern Europe from which most early settlers came. Burn Australia’s perennials and they come back green; burn Europe’s annuals and they die.

Again, you can predictably lure and locate Australia’s animals because there were almost no predators, whereas Europe’s many predators scattered prey, so the notion of using fire to locate resources was foreign there.

But above all we don’t see because farmers don’t think like hunter-gatherers. For us “wilderness” lies just beyond our boundaries; for them wilderness does not exist. Fences on the ground make fences in the mind.

Until Europeans came, Australia had no wilderness, and no terra nullius.

Today, amid the wreck of what Aborigines made, there remain relics of their management. They depended not on chance, but on policy. They shaped Australia to ensure continuity, balance, abundance and predictability. All are now in doubt.

Bill Gammage is the author of The Biggest Estate on Earth: How Aborigines made Australia

This article was originally published at The Conversation.
Read the original article.

Well that’s what I think these are. The CSIRO estimate there are 250,000 types of fungi in Australia. 5% of these have been identified.

This ugly looking thing has a much more slender “puff” early on. The Stalked Puffball can be up to 15cm high and inside contains lots of purplish black spores. 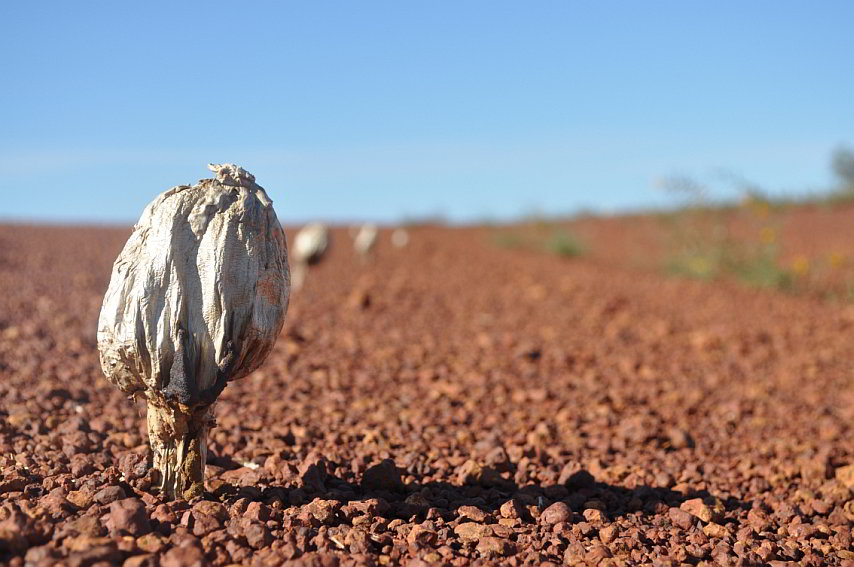 It has a number of names depending on the language. Pitjantjantjara ilpatilpata, Western Arrente kwepe-kwepe and Warlpiri ngupu-ngupu
are just a few.

Apparently, though I have never seen it used at all, kids can paint their bodies with the spores or draw pictures. In the old days it was used to darken the white hair in old man’s whiskers! The Warlpiri people further north supposedly use the same spores as a fly repellent.

The stalked puffball has a close relative, Podaxis beringamensis, which only grows on termite mounds. That’s specialisation for you. It was used the same way.

Next time I see one I might have to give it a go.

Samson and Delilah has been on the tele and now out on DVD. Out here it certainly attractd a lot of interest with it played several times and a lot of discussion by teenagers and adults alike.

It is a love story full of despair and possibly a glimmer of hope at the end. For many unfortunately it is their life.

If you haven’t worked and lived in a remote Aboriginal community, and for some, even if you have, many of the nuances in the film will pass you by. Some of them are explained at the Official Website Frequently Asked Questions.

For those wanting to challenge your preconceptions and learn a lot more about Aboriginal culture I suggest you download the Samson and Delilah study guide. It has links to many more resources and will challenge your thinking. Well worth the read.

In complete contrast is the Aboriginal musical Bran Nue Dae

An Aboriginal Musical. I can hear you all now “Who woulda thought”. I can’t comment much as I have only seen the trailer. However a few kids have seen it and loved it… Laffed and laffed. Light hearted and positive and a lot of fun. Unfortunately like most films I will have to wait until the DVD is released or I see it on the tele.

Over the weekend I was asked to help in a conversation between two family groups from Central Australia who were in a Sorry Camp. One family spoke Ngaanyatjarra and the other Arrernte from the Alice Springs area. With both parties speaking several Indigenous languages, English was the only language they had in common.

The Ockham’s Razor program on ABC Radio National recently had a program looking at the variety of Indigenous languages in Australia. Assistant Professor Claire Bowern from the Linguistics Department at Yale University spoke about the languages of the Aboriginal people of Australia, how and where we used Aboriginal words, and what that tells us of our (whitefella) interaction with Aboriginal Australia during colonisation.

At the time of European settlement, about 250 distinct languages were spoken in Australia. About the same number of languages are spoken in Europe today. But the level of diversity in the families is very different. There are five language families in Europe.

In comparison, the Australian continent was much more diverse: there are 28 different families on the Australian mainland, and that does not include Tasmania or the Eastern Torres Strait Islands. There isn’t just one Aboriginal language, or one language family even; so when someone asks what to call their boat in Aboriginal, that’s kind of like asking what to call it in European. None of these languages are related to anything in Papua-New Guinea or South-East Asia either.

The transcript and audio can be found here.

You can find some of Claire’s work on an extinct Aboriginal language, Nhirrpi, here. It is from North East South Australia, a place I used to call home. The Yandruwandha people, though spread around Australia currently have this country under Native Title claim.