The Australian Institute of Health and Welfare have recently released a report titled Cancer in Australia: an overview, 2008.

I was a little disappointed that there was only a couple of comments, with no explanation, about the much higher incidences of cancer within our remote indigenous population. This is despite a number of studies being done. One has shown those living in the Kakadu around the Ranger Uranium Mine have a 90% higher incidence of cancer than the rest of the Northern Territory.

One paragraph in the report noted that:

Incidence rates for many types of cancer are considerably lower or higher for the Northern Territory than for other states and territories. These differences are mainly due to low or high incidence of these cancers in Aboriginal and Torres Strait Islander peoples, who comprise 29% of the Northern Territory population (d’Espaignet et al. 1996; Condon et al. 2001).

There was no discussion on why the incidence rates would be so much higher despite several studies looking at this issue.

There was some discussion about lower rates of melanoma of the skin and the indigenous population. This discussion was about a quirk in the state based statistics. 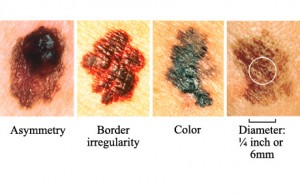 The largest number of indigenous people in Australia reside in New South Wales. However they are a still a small percentage of the total population in this highly populated state. A high percentage of the people living in the Northern Territory are indigenous. You would expect those living in the warmer northern parts of Australia to have the highest incidence of melanoma.

The incidences of melanoma per state are:

We could perhaps expect that the Northern Territory would have a similar rate of skin cancer to Queensland. From the AIHW report:

8.2 Melanoma of the skin
The age-standardised rates for all forms of skin cancer are correlated with exposure to ultraviolet radiation (Jelfs et al. 1994). Therefore one would expect to see higher rates in the more northern states and territories, and lower rates in the more southern ones. However, the rates will also be affected by sun-protection behaviour and the percentage of the Indigenous population (which has a lower rate of skin cancer than the non-Indigenous population).

What about all the other cancers that indigenous people have a much higher incidence of. An article, again by Condon in the Medical Journal of Australia in 2004 (free registration required go to PubMed for abstract) explains why.

As well as cancer affecting our indigenous population earlier, the cancers that affect Indigenous Australians to a greater extent than other Australians are largely preventable (eg, through smoking cessation, Pap smear programs and hepatitis B vaccination).

The cost of vaccinations on each states vaccination schedule is covered by the federal government’s Immunise Australia Program. As well as Hepatitis B, the Human papillomavirus vaccine for teenage girls is now covered, hopefully reducing the incidences of cervical cancer.

Ngaanyatjarra health has won an award for its vaccination efforts in the past. However, when a new vaccine is introduced there are no funds provided to assist in a program to vaccinate all members of a remote community.

These higher cancer rates in indigenous Australia I feel highlight our health authorities failure to make funding available to ensure this hard to reach population group, who are often moving about in very remote areas, can be followed up and vaccinated.

The award had four winners from two categories. Ngaanyatjarra Health was the only winner in the category, A significant increase in, or commendable, immunisation coverage in populations of hard-to-reach children and/or adolescents.

Below is an extract from the article that appeared in Australian Doctor on 30th September.

THIS year’s GlaxoSmithKline childhood immunisation awards highlight some of the innovative approaches taken around the country to boost childhood immunisation coverage. They range from a city council’s overhaul of its clinic-based immunisation program, to ensure a more parent-friendly appointment-based service, to a GP network’s use of a mascot called “Grubsy” to sell the benefits of vaccination to parents and children.

Awards were granted in two categories

1) A significant increase in, or attainment of, high immunisation coverage in children over 12 months; or

2) A significant increase in, or commendable, immunisation coverage in populations of hard-to-reach children and/or adolescents.

The four winning teams, profiled below, chosen from 27 commendable entries, each receive a grant of $12,500 to support a local immunisation-related activity.

Winner: Significant increase in, or commendable, immunisation coverage rates in populations of hard to reach children and/or adolescents.

The result: The initiative exceeded the 90% overall childhood immunisation target, achieving rates of 96.9%.

Ngaanyatjarra Health Service had a formidable task on its hands, given the challenges of providing immunisations to communities that are at least 1000km from a regional centre.

Communication between clinics and with external organisations was difficult, with the vagaries of satellite phone links, unreliable power supplies and the absence of a central computerised record system. Add in problems with ensuring delivery and storage of vaccines, and difficulties finding and retaining suitably qualified staff, and it is hardly surprising that immunisation rates in children were below par (72.5% across all cohorts in 2007).

The self-imposed target of 90% might have been considered ambitious under these circumstances, but the Ngaanyatjarra team were undeterred, setting in place a multidisciplinary plan of action. Doctors, pharmacists, remote area nurses and child health coordinators were all involved, as were health information and IT co-ordinators.

Fifteen months after the start of the initiative, results were impressive, with overall coverage having steadily risen to 96.9%.

However, the Health Information Manager, Lesley Clay, said much of the recognition should really go to the nurses on the ground. Operating at full stretch, often with only one remote area nurse per settlement, she said their dedication and resourcefulness continued to be admirable. Given the remoteness and the degree of transience of the population, it could be quite a challenge even to locate a particular family, she said.

Preferring not to give out lollies after immunisations in view of the high prevalence of diabetes among the adult population, the health service plans to spend its award money on a new approach — beanies to give children as a reward for having their needles. As well as keeping kids warm in the cold desert winters, the beanies will help promote Ngaanyatjarra’s ear health program.

The Ngaanyatjarra team believes its results can be maintained, as the new strategies have been integrated into everyday practice

If you want to be reminded each time I post you can go to my subscription page and sign up for an email alert or to my RSS feed.

The following is part of a long post from a blog called The Pharmacy Chick as she talk about the professional satisfaction and more she receives from vaccinating patients. Written some time ago it has only recently been published in the Auspharm newsletter.

About 5 years ago, the state I live in decided to allow pharmacists to vaccinate. I was slow to jump on the bandwagon by one year. I took the wait-and-see stance before I plunged a syringe into somebody’s arm. One year later found me in a class learning proper technique (which I already knew from my nurse-mother-who-needed-allergy-shots-for-years. Somehow I knew that this would be a good thing for my business and profession. I was right.

I started out with flu shots. I was nervous as a cat at my first clinic. I was convinced that some yo-yo would faint on me. Nobody did, and 10,000 shots later, nobody has fainted on me yet, although a few smart alecks ask me if they need to “bend over” Uh, no thanks.

A surprising thing happened however–customers looked at me different. I ceased to be the pill-counting machine they thought me to be. They discovered I had hands that did something different than just fill prescriptions, ring up sales and hand them the bag. They touched the patient! They discovered I had a lap that sat next to them, even if its just for a minute. They found out they could have my rapt attention when they had an appointment for a shot. No competition for the phone/pill tray/cash register/and every other customer. One on One for a few precious moments, eye to eye, sitting next to them in a chair. This was something they had never seen me do: sit.

They also discovered that I could provide a service that had been previously monopolized by the Dr’s office. I was soon vaccinating pneumococcal, TD, Hep A, Hep B, Meningococcal, and others.

How I was perceived by these people changed. An interesting observation: Joe hands me a prescription for Drug X and asks how long it will take. I tell him 15 minutes and he balks “THAT LONG?” Steve comes in and inquires about a Tetanus shot. He asks how long it will take: 20 minutes “THATS ALL?” It seems that all it takes to increase the respect quotient, is a sharp needle.

A few lines further down she says: “Its one of those rare instances where we get paid for the service aspect of this profession.”

If you like this post why don’t you subscribe so you can be notified when more great stuff appears. You can do this by full text RSS feed (the orange button) or by email. The email subscription is just under my profile picture. Or you can visit my subscription page.