I drove off the lands on Boxing Day 2015 and stayed a couple of nights with Bob Gosford. For my sins he forced me to answer his 10 question quiz. The original post is here.

My pet hate listed in the quiz has certainly come to prominence following the 4 Corners investigation into the running of Indigenous Corporations. Please watch the show “Ripped Off” if you have not already seen it.

Ten questions for Robbo aka @BiteTheDust

In July 2015, Robbo was named the Pharmaceutical Society of Australia Pharmacist of the Year for 2015. Robbo has worked for the last ten years as a remote pharmacist in the vast Ngaanyatjarra Lands of Western Australia adjoining the NT and South Australian borders and is a tireless advocate for improvements in Aboriginal health.

I had a yarn with my good mate Andrew “Robbo” Roberts aka @BiteTheDust over the Christmas break just before he flew out of the country for a few months.

In July 2015, Robbo was named the Pharmaceutical Society of Australia’s Pharmacist of the Year for 2015. Robbo has worked for the last ten years as a remote pharmacist in the vast Ngaanyatjarra Lands of Western Australia adjoining the NT and South Australian borders and is a tireless advocate for improvements in Aboriginal health.

At the time of his induction he said that his:
”… biggest thanks go to the people of the Ngaanyatjarra Lands for welcoming me on to their lands and into their lives for over 10 years. I hope this award increases the recognition of the need for pharmacists to be working as part of the health care team for our remote Indigenous Australians.”

The Northern Myth: Tell readers about yourself in ten words.

TNM: What makes you happy?

R: Coming out of the bush and having someone make me a fresh coffee that I haven’t had to make myself.

TNM: What makes you angry?

R: The sheer waste you see and the blame-shifting by whitefellas buggering up indigenous organisations.

TNM: Cats, dogs, both or neither?

R: Dogs. The less said about cats the better.

R: I don’t really listen to music much but out bush where I am you get the church going or some locals playing music somewhere in the community. There is always music in the bush.

R: There are a few bits of music that I always associate with certain things that happen in the past, so some of the old seventies songs, a bit of old Skyhooks or pretty much anything by Madness …

TNM: Where do we go when we are dead?

R: In the ground.

TNM: What do you sing in the shower?

R: Nothing. I’m not a singing person.

TNM: When did you last break the law?

R: Yesterday when I did a u-bolt outside your place without putting the indicators on (laughs) and usually every time I come into town because out bush you don’t worry about white lines or indicators.

R: Top-loader – out bush that’s all there is!

R: Well I couldn’t count Girl (my Dingo dog) as a possession. Can’t really answer that one …

R: Pen! I love a fountain pen. I’m left-handed and I’m a shocking writer so at least it makes me try and have hand-writing that is legible.

TNM: What are you reading in non-fiction?

R: Not much at the moment, all my stuff is packed up. The last book I was caught reading was just released about the life and works of the artists from Wanarn Aged Care called The Wanarn Painters of Place and Time: Old Age Travels in the Tjukurrpa made with the assistance of the arts centre from Warakuna. Some great old artists from the lands have ended up at the aged care centre, including Dr. Mary McLean who is now a West Australian Living Treasure. She doesn’t paint anymore but she is a renowned artist who lived in Kalgoorlie for a number of years and moved back out to country to stop at the Wanarn Aged Care facility.

TNM: What about fiction?

R: Yeah, I’ve been churning through a lot of books. I didn’t read much for ages but I’ve been reading some nasty and forgettable crime fiction recently. Not much of any substance for a while.

Bev Manton the Chairwoman of the NSW Aboriginal Land Council today personally handed to Oprah Winfrey a DVD showing the bits of Australia she won’t see on her tour down under. 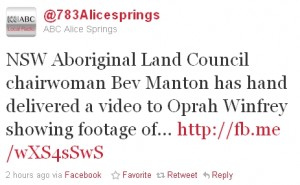 The part of Australia Oprah won’t see is the living conditions of her “brothers and sisters” living in the Northern Territory in third world conditions as experienced by Bev on a recent fact finding mission.

Here is a 7 minute short of the 15 minute video that was given tom Oprah. The full 15 minutes will be available from December 20.

The ‘Care and Protection of Children Act’ in the Northern Territory in its short life has undergone several amendments. The ramifications of the legislation were far reaching and impacted on the way healthprofessionals, particularly doctor could interact with younger patients. As I wrote at the time:

This meant that doctors had to compulsorily report any child under the age of 16 who they suspected of having sexual intercourse. This would have ruined any patient confidentiality with these kids, probably more with the girls dealing with teenage pregnancy.

Even sillier, it was interpreted that the sale of condoms to anyone under sixteen years also had to be reported to the authorities.

I guess it’s no surprise, but the legislation has been amended yet again. The correspondence explaining the changes states:

The amendments followed extensive consultation with a range of professional groups, including lawyers and medical practitioners, who were concerned that the then-law may have the unintended consequence of discouraging sexually active young people from seeking confidential advice and care on medical, psychological and other issues relating to sexual health matters.

You can read that as health professionals kicked up a stink and pollies were forced to review it yet again.

The correspondence explaining the changes is below. It seems the major change has to do with the type of sexual activity and the age of the child.

Earlier this year the Northern Territory passed the ‘Care and Protection of Children Act’. This meant that doctors had to compulsorily report any child under the age of 16 who they suspected of having sexual intercourse. This would have ruined any patient confidentiality with these kids, probably more with the girls dealing with teenage pregnancy.

Even sillier, it was interpreted that the sale of condoms to anyone under sixteen years also had to be reported to the authorities.

With a lot of pressure from medical and civil rights organisations amongst others the Act has already been amended.

Amendments to the Care and Protection of Children Act

The NT Legislative Assembly passed amendments to the Care and Protection of Children Act on 20 August 2009. This followed a concerted effort by a Coalition of health and legal organisations (Really Caring for Kids Coalition) of which GPNNT was a key contributor.

The amendments to section 26 of the Act, introduced to Parliament as a matter of urgency, addressed health practitioner’ concerns that the mandatory reporting of sexual activity in 14 and 15 years olds had resulted in young people not accessing sexual health advice and treatment through their local general practice or health clinic.

Health Professionals should note the amendments maintain strict mandatory reporting requirements for all Territorians to report harm and exploitation, including sexual abuse, and also recognise the greater responsibility for health practitioners in assessment and notification.

A full review of the Act, including section 26, is planned for April 2010, and the Really Caring for Kids Coalition will continue to monitor the progress.