It’s been hot all over Australia with Tasmania alight and NSW having a shocking day today with over 132 fires.

Out bush we’ve had fires burning out almost continuously for months now. Some of it as planned patch burning, others by lightening strikes and others well, just because…. But we have a bit of room out here so they barely impede us.

It’s also been a bit warm. Here’s the daily maximum temperatures at Warburton (125km away) since Christmas Day

We’ve had eleven days in a row over 40C and if it wasn’t for the cool change on the 27th and 28th of December with maximums of only 39.5 and 39.7 respectively we would have had 19 days straight above 40C.

December’s minimum temeratures were 2.2C above average at 23.7C and the maximum average was 38.3C, 1.9 above average.

Last night was warm, perhaps the warmest January night out here ever at 32.2C and if these temperatures keep going we’ll have our warmest January average at 43.^C which id over five degrees above average.

I don’t know about you lot but I’m going to enjoy the cool change on Sunday. It’s predicted the maximum temperature will drop to 41C.

Addition: Also have a look at what a little bit of rain does.

Earlier this year there was a bit of a dust storm at Fregon Community in the AP lands South Australia. (click on the pictures to see it in all its glory). These pics from a Remote Area Nurse. 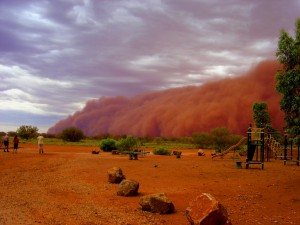 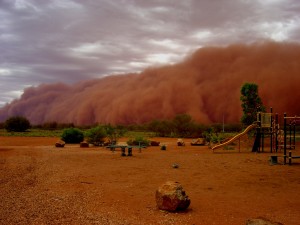 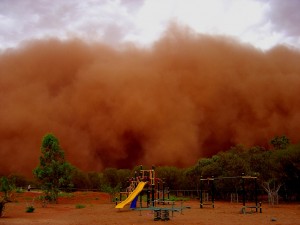 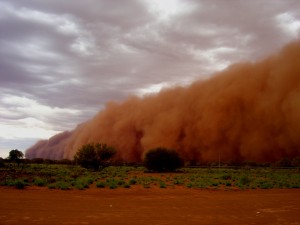 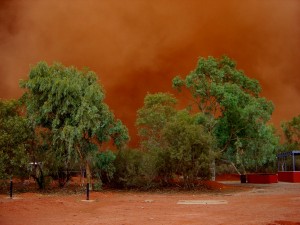 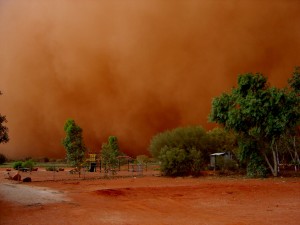 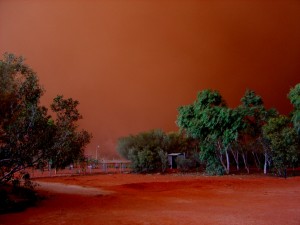 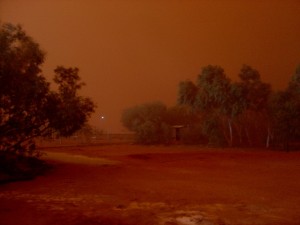 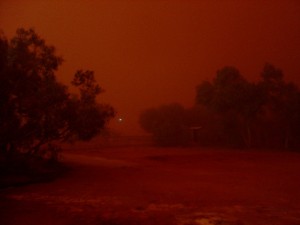 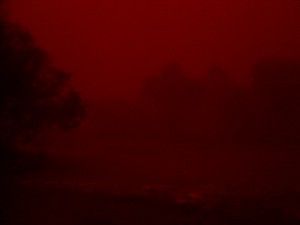 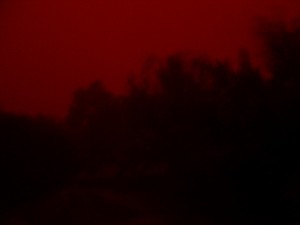 I’m sure they were cleaning dust out of every nook, cranny and orifice for weeks!

If you like this post and what else you see on the blog please subscribe by RSS feed (the orange button) or by email. Or you can visit my subscription page.

We’ve had over seven inches of rain in the last few weeks. Not bad for a desert where not much rain is needed to make things sticky. It leads to flights being missed, cars being bogged, food trucks being bogged (ever try to unbog a road train), and roads flooded and impassable anywhere from 24hrs to weeks, with a big disruption to services and plans.

Our community has been having daily (if not more frequent) generator failures and today all communication across the lands (and into Alice) was disrupted for most of the day with an equipment failure (being out here it probably won’t make the news). Wingellina, due to flooding and irregular deliveries has run out of fuel for vehicles. Unsure about fuel left to run the community generators. Here is a weather report I sent out a few days ago. 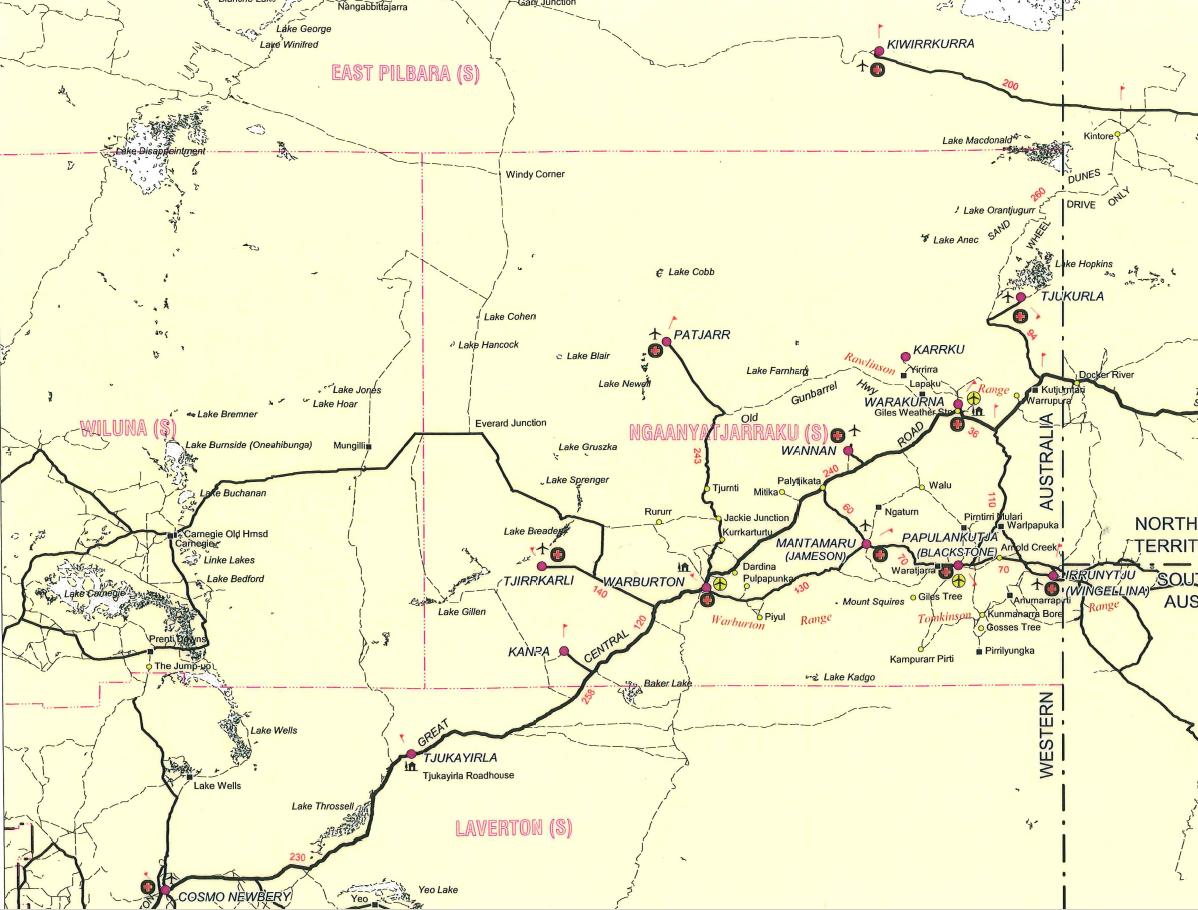 Great Central Road to the west of Warakurna (Giles) (70km wide storm front) and all Mulga Park Road through to Wingellina has had rain continuously from about 7pm (now midnight WDT) from 2-6mm an hour. Wingellina is in the middle of the 70km wide storm front. Suggest Mulga Park Road will be difficult if not impassable, and probably closed by Shire.

Roadhouse at WBR informed me Wingellina could not get a vehicle out along bottom road up to pick up stores. The Wingellina-Blackstone road has been receiving the same rain as Mulga Park Road. Shire vehicle travelled road on Tuesday and got through. Today anecdotal reports of number of cars stranded as people try to get to Amata for a funeral.

Jameson to Blackstone road has had very long extended water on road (several hundreds of metres) and has been receiving showers over the last five hours. Vehicle from Blackstone apparently did manage to get out to retrieve stores from Warburton today (Wednesday)

The Cut Road from Jameson to the Great Central Road is impassable 30km from highway. A track has been made to the west through higher, but still waterlogged ground just prior to logs over road. This alternative route may be impassable depending on amount of rain. Regular showers of up to 2mm/hr have been falling on Cut Road since 6pm. There is a tree over the road (16km) and some very marshy ground where truck was previously bogged (36km from central road). Two vehicles will be travelling out that way from Jameson early am. Will know more then!

Warburton – Jameson Road has been receiving occasional light rains. Bog ~40km from Warburton quite slippery and deep with numerous vehicles bogged there in last few days. Otherwise Warburton side of road is not bad. Jameson side has large amounts of water still on road and road washed completely away in a couple of places. Stick to road or well defined side tracks as country is completely waterlogged.

Five cars pulled from bogs on roads around Jameson today prior to current rains. This has included some you-beaut white fella 4wds including one whose front suspension broke and tyres damaged as he found a hole a bit deeper than usual.
Thunderstorms expected Thursday morning.

If you liked this you might also want to look at my video on my Peak Hour Traffic and my little post about a Drive in the Country.

I hope to have a few more pictures up for my next Pleasant Sunday Afternoon post. Keep watching!